Prompted by some good discussion I've read on TexBirds and elsewhere: I want to stress the point that the danger to birds is not so much the height of the wall, but more the wide swath of habitat that would be cleared for the wall and service roads. Chachalacas, Pygmy Owls, Green Jays, etc will fly over a wall, but they're less likely to cross 100 yards of barren gravel. This project might as well be a 4-lane highway.

So let's try to take immigration completely out of the picture for a moment and imagine that, instead of a wall, the federal government was proposing to build a 4-lane expressway along the river from Brownsville to Laredo. Wouldn't there be a unified grassroots uprising against it? What if they revealed that it would cut right through parts of the LRGV Wildlife Corridor, which has been so carefully patched together and cultivated over the last 20+ years? And what if there would be no exit or overpass anywhere near the Sabal Palm sanctuary and other sites, effectively cutting those places off from the existing road system? And, on top of all that, what if they announced that, in order to speed construction, all environmental review would be waived? Wouldn't we all be outraged?

People may feel conflicted or uncommitted about the border wall because it is tangled up in hot-button issues of immigration and National Security. But those issues are irrelevant to the birds. The reality is that the wall (like an expressway) would be catastrophic for birds and birding in the valley (and what's bad for birding is generally bad for the birds), and we need to speak out to demand that those concerns be addressed. Congress allowed all this to happen, and they can change it, but they need to hear from lots of us. See http://noborderwall-take-action.blogspot.com/
Posted by David Sibley at 9:32 AM 8 comments:

Do something: Write or call Congress. See the No Texas Border Wall campaign and their suggestions for action with several petitions to sign and instructions for contacting government officials. Defenders of Wildlife has a handy form here for writing to your representative.

---------------------------
The proposed border wall (1) from Texas to California has been hotly debated, but birders should be aware that aside from local residents (2), as a group, we will be among those most strongly affected by it. Problems include:
Border security is important, but for whatever help this wall will provide (6), the need for secure borders should not trample environmental laws. We must be able to increase security while still maintaining the natural and cultural heritage of the border region.
---------------------------
Notes:
1) In the subtleties of language, calling this a fence implies a neighborly sort of boundary marker. It is really a wall, actually two walls - at least 15 feet high, solid metal and concrete, with a road on either side (see photos here).

2) Local residents are overwhelmingly opposed to the wall. An article in the Texas Observer with the local viewpoint and other issues is here

(3) from a Houston Chronicle article here "Federal wildlife officials said they are concerned the waiver of the Endangered Species Act and other environmental laws will threaten the survival of a number of animals by allowing the fence to be built through a 90,000-acre wildlife corridor they spent $100 million assembling in South Texas."

(4) A refuge official says that over two-thirds of National Wildlife refuge land in the Valley will be negatively impacted, either directly or indirectly. Not to mention that access to the river will be limited, and a number of homes, businesses, and historic sites will be on the other side of the planned wall.

(6) only 70 miles of wall are planned along 300 miles of the Rio Grande. Eagle Pass Mayor Chad Foster told the Houston Chronicle here "I'm just a yahoo from Eagle Pass, Texas, but this is just the absolute height of folly"

Defenders of Wildlife press release here and lots more in the "Related Information" sidebar
Posted by David Sibley at 11:38 AM 3 comments:

Here's an example of one of the countless thousands of questions that are still out there waiting to be answered about North American birds. I went to Texas in February (for the opening of the fantastic new Clif Moss Nature Education Center of the Corpus Christi Public Library) and I had a chance to see some Wild Turkeys nearby. As expected they had whiter tips on all the body feathers than northeastern birds, but they also seemed thinner and smaller-headed than the Turkeys that frequent my backyard in Massachusetts, and when I got home I immediately saw what the difference was. 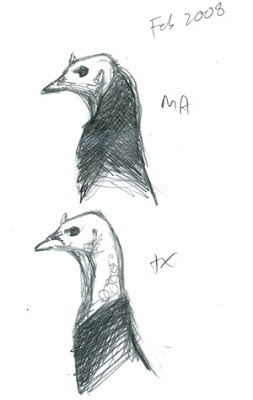 The Massachusetts Wild Turkeys have feathering extending all the way up the neck, while the Texas Turkeys have a long stretch of the upper neck bare (here's a quick sketch I did that first morning at home). This is logical, presumably an adaptation to the cold weather in Massachusetts, but in a quick review of some sources (the BNA account) I found no mention of neck feathering as a geographic difference. I thought maybe it was just a winter feature; maybe the Texas birds had already lost their "winter coat", and the Massachusetts birds would lose their neck feathers for the summer. They may still do that, but as of today (2 April 2008) they look the same.

As usual, this just brings up more questions: Is this going to be true year-round? What are the patterns of variation? Do all southern birds - Florida, Texas, Arizona - lack neck feathers? Does it change gradually from north to south or is the change more abrupt? and lots more....
Posted by David Sibley at 11:29 AM 6 comments: