Determining the age of a goose can be helpful for identification, and can also reveal some interesting behavioral and ecological information by enabling you to sort out family groups and subflocks. Given good views it's not hard to distinguish Canada Geese that are still in juvenal plumage from those that are in adult plumage. By October many immatures (hatched in the summer a few months earlier) will have molted most of their body feathers into adult-like plumage, while others have not yet begun to molt. In general, consistent with other species of birds, the late-molting juveniles are long-distance migrants from far northern breeding grounds, while local Lower-48 resident Canada Geese molt in early fall. 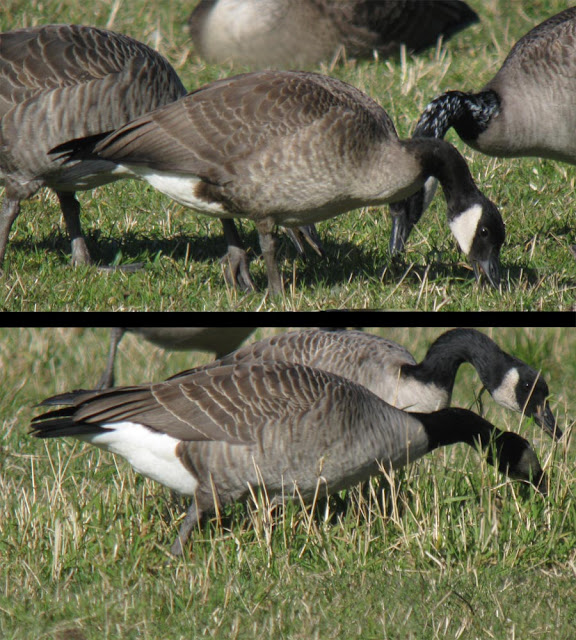 Differences apparent in these photos are:

Similar differences in feather shape and pattern should allow ageing of other species of geese as well.
Posted by David Sibley at 2:25 PM 4 comments:

Have you seen any Field Plovers lately? Blue Nutcrackers? Day Owls? These are all alternate common names of North American birds. Richard Banks has assembled a complete list of outdated English names of North American birds along with the current official names for those species, and it makes a great resource to find out what early authors meant, as well as just fun browsing. You can read it at Obsolete English Names of Birds and their Modern Equivalents.
If only there was a similar resource for North American plants.
Posted by David Sibley at 10:55 AM 4 comments:

Corrections to The Sibley Guide to Trees

Here are page-by-page corrections and changes for the Sibley Guide to Trees. This listing will be updated periodically as issues come to my attention. Please feel free to leave comments or send me an email if you notice anything that is not listed here.

p 179 - Tanoak - caption at bottom right should specify “pale underleaf conspicuous among dense, dark foliage”
p 189 - Southern Red Oak leafy twig, the caption saying “acorn identical to Southern Red Oak” should instead say “acorn identical to Cherrybark Oak”
p 227 - Tung-Oil Tree - leaves should be larger
p 252 - Glossy False-buckthorn includes the three leaves at the top of the column and the map at the bottom. The yellow box of text and the three leaves immediately below that are Ceanothus. The map should be moved up above the box text to make clear that it represents the range of Glossy False-buckthorn.
p255 - Rose Family Intro, near bottom of column 1 should say "Plums and Cherries (Prunus) page 256" [not page 254]
p 302 - Slippery Elm, in the third sentence "fragrant" is misspelled.
page 332 - Intro to maples, the third paragraph begins "All maples have palmately compound leaves..." This should instead say "Nearly all maples have palmately lobed leaves..." And could go on to elaborate that a few species have the leaves so deeply lobed that they are compound, and Boxelder is unique among the maples in having pinnately compound leaves.
p 345 - Mountain Maple underleaf should be rotated with stem down, (same for Vine Maple)
p 392 - First line of text - capitalize Paulownia family
p 393 - Aralia Family, add a sentence saying "Castor-Aralia (p 322) is also a member of this family and should be placed here." [and in a future edition it will be]

Index:
Pignut p 145
Rose Family p 254
And it is suggested (see comments below) that species like Northern White-Cedar and Western Redcedar should have an entry in the index under "cedar". [and presumably there are other examples like this]

Trees with opposite leaves

In the past, tree identification guides have emphasized the presence of opposite leaves as one of the most important field marks. In the Sibley Guide to Trees I used a more holistic approach, like modern bird identification, giving equal weight to all parts of the tree. A tree might catch your attention because of its flowers, twigs, bark, fruit, etc., and I don’t think it’s helpful if the field guide then asks you to check whether the leaves are alternate or opposite. It’s better to get to know all of the distinguishing characteristics of oaks and maples, for example, so that you can recognize them by multiple features, rather than having to check leaf arrangement.

In some cases, however, when you encounter a confusing tree, the presence of opposite leaves can be a useful pointer to help narrow the range of possibilities. So below I’ve put together a list of trees with opposite leaves. Interestingly, almost all of these species show up in the last 80 pages of the guide.

Definition from p xxiv of The Sibley Guide to Trees:


These patterns can be detected even more easily in winter, as buds and leaf scars on the twigs match the arrangement of the leaves (either opposite or alternate), and branching tends to be opposite or alternate as well. Also note that twigs with alternate leaves tend to grow in a zigzag pattern, while trees with opposite leaves generally have straighter twigs.

Species counts only include those illustrated in the guide.

North American Trees with Opposite Leaves

One of my regular birding spots is a small farm field near my house in Concord, Massachusetts. I can walk around the entire place in about 20 minutes, but I usually take about two hours and get in some good sparrow-study. The clump of taller vegetation shown here is always a good spot to study birds that come up out of the grass and weeds and perch a little more conspicuously, so I usually spend a lot of time standing here looking at sparrows through my telescope. 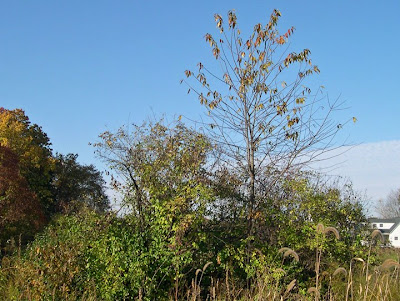 On one visit in September 2008, I noticed that the three common species of sparrows – Savannah, Song, and Swamp – were using different parts of the vegetation, and I made a note to watch for this on future visits. It seems to be fairly consistent, so I can now produce a kind of "map" of sparrow-regions within the shrub thicket. 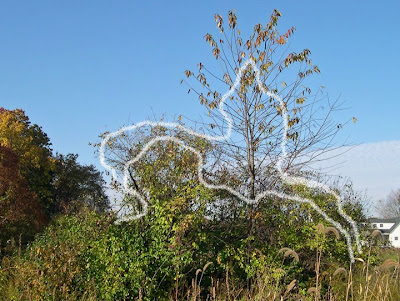 I've divided the thicket into three zones that I'll call the margins, the middle, and the depths. I was seeing mainly Savannah, Song, and Swamp Sparrows, and those are the species I'll discuss here.

Of course, in real life this thicket is three-dimensional, but the zones I've drawn are more like a cross-section. So a Savannah Sparrow could head for the lower parts of the thicket and still land in the margins of that shrub.

This may seem trivial, but it's really no different from habitat and other "soft" identification clues. You certainly can't identify a bird solely by its chosen perch, but we should never doubt the capacity of the human mind to discern subtle differences in probability (just look at baseball batting averages). The more I watched the more I realized that these are helpful clues to identification, just as date and habitat are helpful clues. A sparrow that flies right up into the highest twigs of the cherry sapling is almost certainly a Savannah, and it doesn't take much more to confirm that. A sparrow that goes straight into the deep cover and then barely pokes its head out is likely to be Swamp (or White-throated, or sometimes Song, but at least we can start with some idea of the likely species).

Check it out in your local area. I'd be interested to hear how it works in other places and with other species. And of course the same principle should be applicable to lots of other situations.