I've thought more about the "square-peg-in-round-hole" analogy in my previous post, and made a few simple drawings to expand that analogy. In many ways, bird identification is like a matching game. The observed bird (here in black) must be identified by matching it to illustrations in a diagnostic key (the gray shapes here). 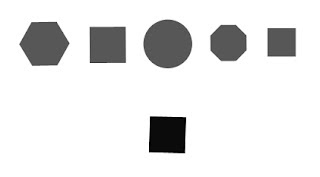 This is pretty straightforward, and you should have little trouble matching the shape and size of the black object to the gray shape second-from-left. But what if I change the question, to make it conceptually more like a real-world birding situation in which the observation is not absolute, but just a relative judgment of some of the characteristics of the bird: You've seen a bird (black square) and there are five potential species (gray shapes). Which of the five gray shapes is of sufficient size to "fit" the observed shape? i.e. Which holes could the peg fit into?

This is quite a bit tougher. The square second-from-left still provides the best match, but since we're now looking for anything that fits, the black square would also fit inside the gray circle (center) and looks like it might fit in the hexagon on the far left (it doesn't, but that's very difficult to judge).

Now I'll make it even more like a real-world birding situation and present the peg at an odd angle, which then has to be matched to the gray shapes in the diagnostic key (the field guide). 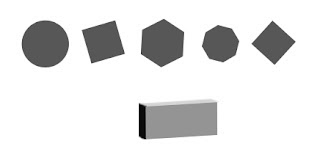 This is a common field situation: you've only seen part of a bird, or only flying away, and you have to be able to interpret the perspective and the contours to figure out which of the nice profile views in the field guide is the best match. In this example I'm still emphasizing the black square (now foreshortened) as the key feature, so by understanding perspective you should be able to match the peg to the square second-from-left... but it's getting harder.

Now I'll take another step into ambiguity, and make this even more like a real birding scenario. Which of the five gray shapes matches the black and gray shape below?

You've observed a three-dimensional shape, from an odd angle, and now you need to match it to one of five potential confusion species, but you don't know which of the observed features of the shape are really diagnostic.

In this case one observer might say "Look at that thin black vertical end, it matches the center shape". Another might say "But look how long it is, it matches the far right". While another might say "We're seeing it from the wrong angle, it's square, and the length is irrelevant, it matches the second-from-left" and a fourth might say "It also fits the circle on the far left, and I don't see how we can rule that out". All are correct interpretations. The only way to resolve this kind of disagreement would be with more study to figure out which features matter, and which are insignificant.

Going back to my first point - bird identification in the real world is rarely as straightforward as the clear differences between these circles and squares. In bird identification we are usually making subtle and subjective judgments such as tail long or short, bill pink or orange, etc. But even seemingly straightforward features like white wing patches can be ambiguous - either misinterpreted or mistaken, or shown by rare individuals of other species. Identification is often not just a question of finding the first species that matches our observations, but considering all species that could fit.

None of these challenges are particularly difficult to overcome, and there is tremendous satisfaction in sorting out bird identification and being able to name a species confidently. But a critical part of doing that well is keeping an open mind, understanding the limitations and pitfalls of our imperfect perception, and having the strength to say "I'm not sure".
Posted by David Sibley at 9:45 AM

The issue of perception (naming something influences perception) has been studied in linguistics for a century now. It's been hotly contested whether language influences mind, but there are some interesting experiments. Here's a recent one.

Your illustrations reminded me of an excellent site with a rather comprehensive collection of optical illusions.