More on identification of Greenland White-fronts

Coincidentally, just days after my last post about the two White-fronted Geese in Concord, two White-fronted Geese showed up in Amherst, Massachusetts (about 60 miles west of Concord, but not the same birds) that appear to be one Greenland and one North American type. James Smith has some discussion and really nice photos on his blog, and he's allowed me to post some of the photos here. 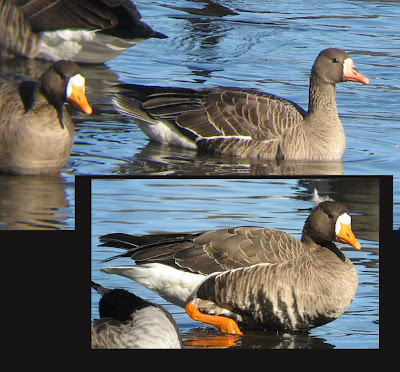 Two Greater White-fronted Geese - 23 November 2008, Amherst, MA. Photos copyright James P. Smith, used by permission. Click for higher resolution (660 kB). In this montage the upper image shows the apparent North American bird with the Greenland-type on the left. I've resized and pasted in another photo of the Greenland type below for comparison.
This provides a great comparison of the two birds, very well-photographed, in similar light and from similar angles. The Greenland-type bird shows the following differences from the North American-type:
These are all the same differences that I noticed on the two birds in Concord, and that have been described before as identification features for Greenland White-fronts in Europe. One other feature deserves mention:
And on 24 November, Taylor Yeager posted photos of another apparent Greenland White-front (scroll through the gallery to see several images of this bird), this one in Sharon, MA about 30 miles south of Concord. This bird doesn't look quite as heavy-billed as the other two, but it still looks fairly thick-necked, the bill is bright orange, and it has the dark head, narrow and low-contrast feather edges on the back, virtually no white on the wing coverts, very narrow white flank stripe, and extensive black on the belly between the legs. I'm comfortable calling this a Greenland White-front also.
This would all seem to lead to confidence in identifying Greenland White-fronts, and I think we're getting there. But when I browse photos of White-fronts from other areas they show a bewildering range of variation. Identifying Greenland White-fronts will require excellent views and a careful assessment of all the different identifying features, preferably with direct comparison to other White-fronts, and a healthy dose of caution. 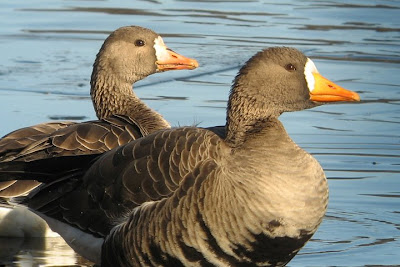 Another photo of the two birds in Amherst: Greenland-type in front showing the much larger and bulkier bill and head, and thicker neck, in comparison with the more delicate features of the North American-type bird behind. Photo by James P. Smith, used by permission. 23 November 2008, Amherst, MA.
Finally, one further mystery: It's not at all clear how we can tell that the smaller bird in Amherst is a North American White-front rather than a Eurasian bird. I don't think I've ever seen a discussion of that identification issue, but Eurasian White-fronts show up rarely in Iceland, and could easily wander into North America from there or from Siberia, so it is a potential vagrant to North America. All I can dig up in a cursory search is that Eurasian birds are consistently pink-billed, and may average smaller-billed, and may average less white on the wing covert and tertial edges, but those things are all vague, subjective, and variable. So while I've called the smaller bird in James Smith's photos a North American-type, I can't actually rule out the possibility that it is a Eurasian bird. Any comments or suggestions welcome.
Posted by David Sibley at 10:13 PM

The problem with this species (or these?) is that birders usually only know them from and study them on their wintering grounds where it is very hard to judge if an odd-looking bird is of the same population and just showing the amount of individual variation or really a stray bird from another population documenting the species' geographical variation.

As with winter gulls, we can try and guess and make educated guesses etc., but we'll only be able to know for sure once the geese are studied on their breeding grounds or at least banded there with colour rings that can be recognized on the wintering grounds.

There was an article in Birding World (don't remember which issue, sorry) where the identification of Greenland GWFG is discussed in a European context, using a single family observed in the southern UK. Quite nice, indeed, but the article completely fails to mention or discuss that within this "typical" family unit of 5 Greenland White-fronts, one bird (apparently the adult male) shows a long and pinkish bill.

On plate 1, the relevant bird is the one looking away from the camera (how convenient), on plate 2 it is the left of the two barely visible heads and on plate 4 it is in plain view.
Compare the bill colouration on plate 4 to the colouration of the feet.

You raise a great point. I have the article you reference and would agree with your comments on bill colour and shape. Wouldn't you say though, that the plumage features agree with the author's comments and match what he's describing for flavirostris?

And a Question for you. How do you know that the pink-billed bird is an adult male?

James,
thanks!
Yes, you are absolutely right, the rest of the bird's features are in accordance with the author's description.
This is why the clearly pinkish bill is especially remarkable: it implies that maybe, even flavirostris may show a pinkish bill (depriving us of what is generally regarded as the most significant field mark) or that possibly, though I'd like to stress that I am purely guessing in a very wild and vague way, flavirostris might be clinally connected to pink-billed forms of GWFG in North America.

A few years ago I found a pair of rather typical (orange bill and all) flavirostris in Germany, where they are very rare, and took this great find as an opportunity to look more deeply into the geographical variation of the GWFG. Of course (being based in Germany with only albifrons occuring regularly) this was done entirely through searching for pictures of GWFG online.
As a result of this, well, let's optimistically call it "research", I have found that especially in North America the situation seems quite confusing. For example, a lot of orange-billed geese are observed all across the southern US and often regarded as flavirostris that look completely different, mainly in having rather long legs, a long slender neck and an extensively white belly (some of them are almost reminiscent of a swan regarding shape).
However, the subspecies frontalis, which should be the dominating subspecies in North America, is said to have a pink bill and most of the GWFG I found pictures of really show a pink bill and shorter legs, thicker neck and a darker belly, clearly belonging to frontalis.
So if these orange-billed birds are neither flavirostris nor frontalis, what are they?

The other (one or two) forms of GWFG occuring in North America are said to be localized winter birds in California and apparently mainly differ from frontalis in size and shape, so they are also not the perfect fit for these "white-bellied orange-bills".

And finally, we move over to the coast of East Asia, especially South Korea, where only pink-billed frontalis is said to occur. And as soon as we start looking at pictures of GWFG from there (mostly on www.birdskorea.org, a highly recommended site), we find that apparently there are two forms migrating through:
one smaller pink-billed form which is perfect for frontalis, and a larger orange-billed form with a white belly and longish legs!

This was basically when I stopped thinking about the matter and returned to just being happy about having found typical flavirostris in Germany: I felt there was no result to be obtained, as long as it was not possible to know precisely where the geese I was looking at were born.

Regarding your remark about the pink-billed bird being the male, of course I don't know (having written "apparently"), but a few things point towards it:
On plate 2 of the article, the head appears larger and the neck (what can be seen of it) quite strong/thick when compared to the other adult to the right of it. What is more important though is its behaviour in the context of the entire family group:
On plate 1, one of the adults (the orange-billed bird on the left) is close to the first-winter birds while the other adult (pink-billed) stands quite a few steps off to the right. Basically the same can be seen on plate 4: while the orange-billed adult (the head on the left) is sitting/feeding, pink-bill is standing upright and looks as if it is scanning the surroundings, looking "big and strong".
In family groups of albifrons I observed, it was very often the case that the larger, thicker-necked bird was also the one who was "guarding" the group, looking around the most, always standing a few steps away to survey the situation for potential dangers etc., typical male "macho" behaviour. This was confirmed to me by other seriously experienced "goosers" (as compared to "gullers", maybe?) who were able to confirm this behaviour as belonging to the male by colour marked birds that had been sexed during the banding process. As I said, it is impossible to know for sure from the few pictures provided, but if I had to make a guess as the the pink-billed bird's gender, I'd opt for male.

And one last remark in what is already an excessively long comment:
if you look at the bill shape of the pink-billed flavirostris in the Birding World article and compare it to the bill shape of the definitive albifrons also featured in the article, you will find that the flavirostris's bill is rather slender and long (especially the base of the bill is not very high) whereas the bill of the albifrons bird is more triangular in shape. This feature, although impossible to judge with any confidence in the field or from photographs, nevertheless struck me as being interesting as a more long and slender bill is said to be the main/only difference between the pink-billed North American frontalis and the equally pin-billed Eurasian albifrons.

Whatever that may mean.

Great post!
Every single piece of details are there!
Thank you for sharing!